Everything you need to know about Data Transformations

Written by Marcella Valentine
Updated over a week ago 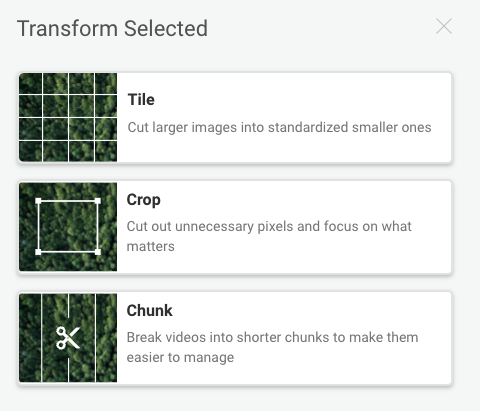 You can read walkthroughs for each specific Media Transformation here:

As more Media Transformations become available, we'll update this page with information on how to get the most out of them!

Here are a few tips and tricks to consider when using Media Transformations.

When should I transform my media?

The scenarios differ from media type to media type, but in general, you want to use Media Transformations to make your media easier to annotate. The simpler you make your annotation tasks, the faster they can be completed and the better the quality will be.

Here are quick examples of how Media Transformations can help make media easier to annotate:

Where should I place the new "transformed" media?

When you perform a Media Transformation, you'll be asked to select a Target Dataset. We strongly recommend using a different Dataset than the one your original "untransformed" media are in.

For example, say you have a large satellite image over the Amazon Rainforest, and you'd like to train a model to look for deforestation. That one single satellite image might be 20,000 x 20,000 pixels in size—way too big for a single person to annotate all at once! It would be wise to tile the image, resulting in many hundred smaller tiles. These tiles can now be annotated in parallel.

But if you were to place the tiled images into the same Dataset as the original 20,000 x 20,000 image, you'd essentially be annotating those same pixels twice: once on the original image, and then again on each of the individual tiles! All that extra work wouldn't yield any better results when training a model, so it would essentially be wasted annotation effort!

Did this answer your question?